Firstly may I just apologise for the delay in getting this blog online. After my last post, mid November, I did say it would be out the following week! All part of my learning curve as a SAHD, don’t promise deadlines while looking after children.

I am keen to her up to date on my journey as ‘daddy day care’ so I can talk about every day life things that either help you as a parent or just down right p####s you off.

Now let me tell you about the summer, particularly the school holidays, or as I like to refer to it ‘the long, long, long hot, hot ,hot summer”.

It was mid July as I was getting over a rather pleasurable World Cup when Helen began her new job.

From March, when Helen went back to work till the start of her new venture, Helen would often leave around 8am and be back in time for the boys bath and bedtime. I guess it was around a half hour journey.

Now though, if I were to say to you, the journey was around 1hr 40mins long and Mummy was all of a sudden leaving around 6.45am and getting home after 7pm, you may start to see the task that lay ahead for this new stay at home daddy.

And so the long hot summer began.

I guess the biggest problem was brought on by myself, I felt I was obliged to get the boys out everyday. I felt we needed to be going places, I was not a good father if I wasn’t doing this. Fortunately after just a couple of weeks a friend asked me what I used to do in my school holidays when I was a lad, did I go out everyday? or away on holiday? This made me stop and think.

When I was younger, my siblings and I were lucky if we had one day down at Ramsgate to visit our Grandparents. We would spend a while in their house before setting off eagerly to the arcades and the beach.

I explained to her, we were lucky to get a one day outing, she asked if it made me a bad person, of course it didn’t. So there it was, I was trying too hard.

I did get out and about with the boys for the odd day here and there.

Our first major outing together was to a place called Sacrewell farm, it was a lovely little place just outside Peterborough with farm animals you could feed, play areas for the kids and a beautiful trail to walk around. 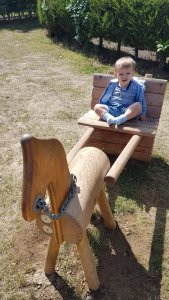 As much as these places are ideal for the little ones, my boys are more interested in running and jumping about than feeding and petting God’s fine creatures.

But we had a good day, we took a picnic and for the best part of the day, the boys behaved and I had achieved my first major outting as daddy day care.

So hands up those who have ever taken their kids to the beach for the day on their own. Well that was a day I shall never forget.

I had been speaking to my eldest sons partner, Vicky, who had been one of my greatest allies through the school holidays, about days out.

Vicky mentioned she was off on a coach trip to a little place called Hunstanton. I thought to myself this would be a great day out for the boys and we would meet them there. I would drive this day as I don’t do coaches, that’s a story for another day.

We arrived at our destination late morning, so I knew the boys would be hungry, made contact with Vicky and headed to the seafront to join her and my two Grand children.

Now as I said earlier, this was one of our hottest ever summers, I at least expect a nice cool sea breeze for the day, but there was nothing.

On the plus side I got the boys down for a paddle, this was the first time in the sea for both boys, just look at Charlie’s face.

We managed to picnic on the side of the promenade while fighting off various wasps, (seriously Lord, why are they on earth), a task I was becoming very good at, sorting picnics I mean not fighting off wasps.

A little after lunch we took off and headed for the little fairground, by now Riley was just wilting, I stopped to buy the boys an ice-cream and turned around to find the day had finally got to the little one

Mummy had agreed to meet us towards the end of the day but work being work, she got there just in time for dinner, a suspect looking meal from the nearest fish & chip shop.

As much as this day was a lovely thought, it was very difficult in practice. I was totally exhausted by the end and to be honest, I couldn’t wait to get home.

The hot month of August became a challenge to try and get the boys out and about. I became quite the google expert at trying to find places to visit.

It also became very apparent very quickly, that Mummy would be staying away from home, sometimes, two or three nights a week.

The week after the seaside trip we already had a lunch booked out for me and Charlie. The local toddler group had arranged a Teddy Bear’s picnic at the home of Judy, a lovely lady who attended the group with the grand daughters.

Again the sun shone and it was a lovely day, Charlie shared his lunch with two favourite bed companions, Wally Wally woof woof and George, both had been with him since his first days 💙. 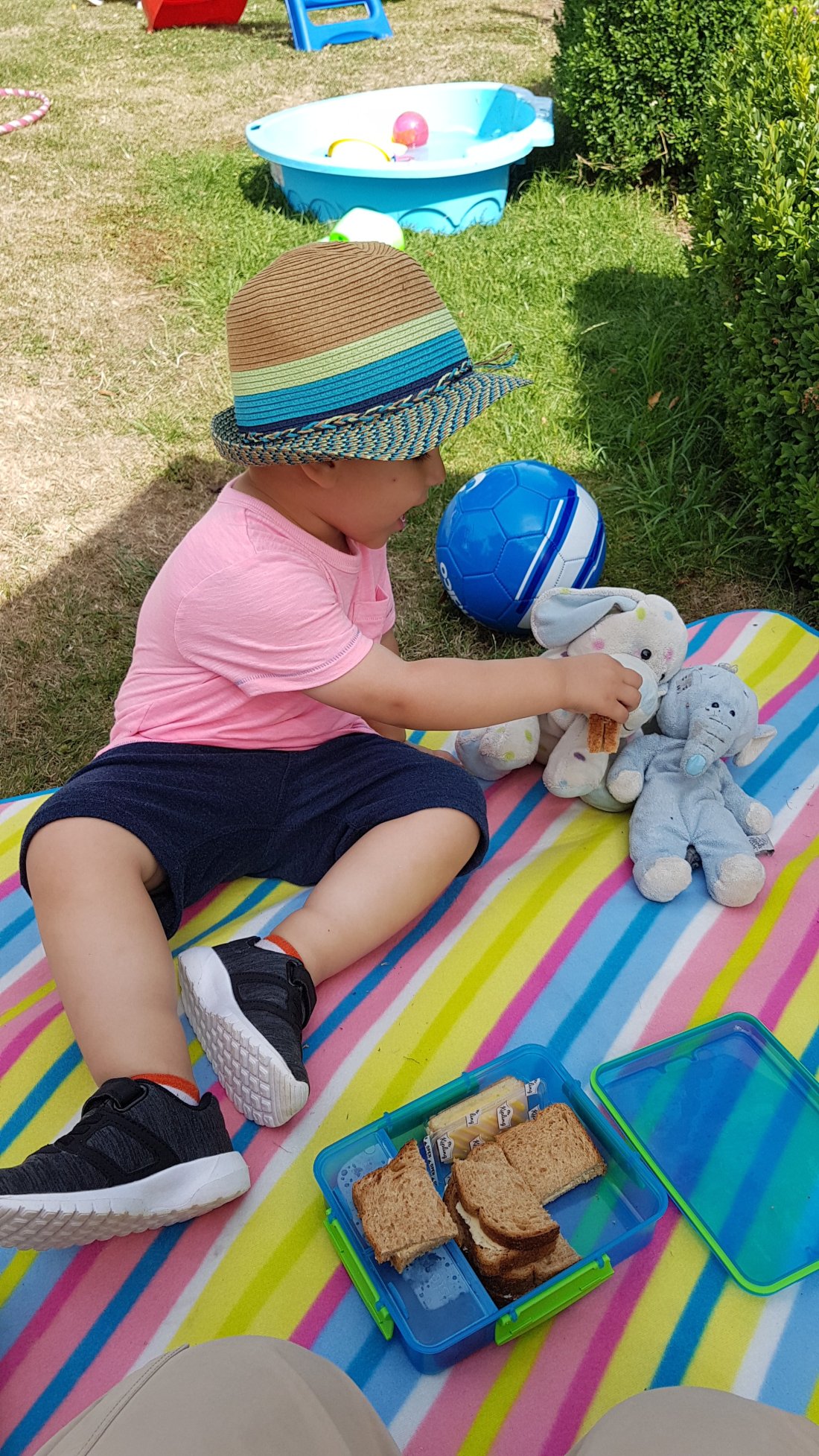 I tried to keep myself busy and the boys happy over the holidays. It was tough as I hadn’t really got to know anyone around the area in my short time as a SAHD. We would always try and get out most days, even if it was a walk to the local park.

It was during these school holidays that we would try and get Charlie back on the ‘potty training’.

I say again, because the year previous, Charlie had shown quite the interest in the potty approaching his second birthday. Then along came Riley, poor Charlie decided he had enough to contend with without having to start concentrating on where he should be going to the loo.

It was hard work I must say, he was so close last year and now the big man wasn’t really interested. After lots of hard work all round Charlie finally cracked it mid September. We still get the odd accident but then who doesn’t. It makes for an interesting preschool collection, as I gaze through the school gates to see if he is coming out with the same pants he went in wearing that morning.

And so I began to bed myself into the role of ‘daddy day care’ as I like to call it, all the while not realising I was slowly slipping in to a dark and lonely place.

My next blog, which I will post in the New Year, (see I’m learning not to promise early publications) will cover my encounter with depression and anxiety, both past and present. I will say now that I write from personal experience and some content maybe upsetting for some.

What has this got to do with ‘daddy day care?’ a lot, it shows how isolation as a stay at home parent can sometimes bring you down. I really want to share my feelings on this subject, on how easily it can grab you and how to fight it.

With the right love and people around you, most curve balls that life throws at you can be handled.

So until the New Year, may I wish you all a very Merry Christmas

Hi, I am a new blogger as of 29/10/18, so please bare with as I get my site running smoothly. I just want to share my experiences as a 'stay at home' Dad to out lovely boys Charlie & Riley. I am at the young age of 56 so hopefully leading the boys down the right road with my years of knowledge (yes, I laughed too) By night I turned in to the dutiful husband to the hard working Mummy, Helen. Please enjoy sharing our journey. View all posts by daddydaycare62